CES is a show full of TV commercials. But how do manufacturers manage to reinvent themselves when innovation slows down? Brief information about Las Vegas.

Historically, CES – or the Consumer Electronics Show – is a show where we discover a large number of innovations related to image and more or less consumer televisions. Over the years we have discovered new display technologies, rollable format, transparent display and many others.

Advancements for this 2023 release are shy, but they shouldn’t be ignored because they have a big advantage over the above: they won’t be coming to our living rooms for 10 years.

How to solve OLED problem?

In recent years, Oled has been massively invited into our living rooms. So our TVs are more contrasty with brighter colors and wider viewing angles than ever before. This self-emission technology has one drawback: low brightness, which makes it difficult to see in overlit rooms. If your screen is facing a bay window, we can only advise you to go for QLED. If ?

A big trend this CES for TV brands has been pushing new high brightness numbers. LG got the ball rolling with the new OLED G3. Thanks to MLA technology (Micro Lens Array), thousands of microlenses reproduce the brightness generated by the OLED in internal reflections. This algorithm-related technology (“Meta Booster”) allows the Korean manufacturer to announce a light peak varying between 1800 and 2100 cd/m² on its new TV.

This number is not small, since it directly competes with Samsung and its QD-OLED. A quantum dot filter also enables brightness in OLED for a peak brightness of 2,000 cd/m² in the Samsung S95C launched this week. TCL, in turn, announced that it wants to apply this technology in some of its models in the future.

Faced with this battle of Korean giants, Japan’s Panasonic is trying to stay in the race. Like LG, it adopts MLA technology to increase the brightness of its TVs. Despite the 50% increase compared to the 2022 generation, it is not enough to set records, but the peak is 1500 cd / m² “onlyFor MZ2000.

Cables are a thing of the past

Gone are the days when TV cabinets threw up all kinds of cables. The trend now is for the cleanest, most minimalist installations possible, the elements of which are better hung on the wall. However, this requires a bit of technique, running the cables through a groove in the wall or a properly fixed channel. In this regard, Samsung is far ahead with the One Connect remote control box or The Frame model, which takes on the appearance of a painting, leaving only one cable from the TV.

LG has taken notice, and so this CES 2023 is introducing a new lineup: the LG Signature OLED M3. What’s special about it? Remote box… wireless. Much larger than the Samsung, this box can stream up to 4K 120 Hz content on the screen without any wires. However, many questions remain unanswered in this regard. 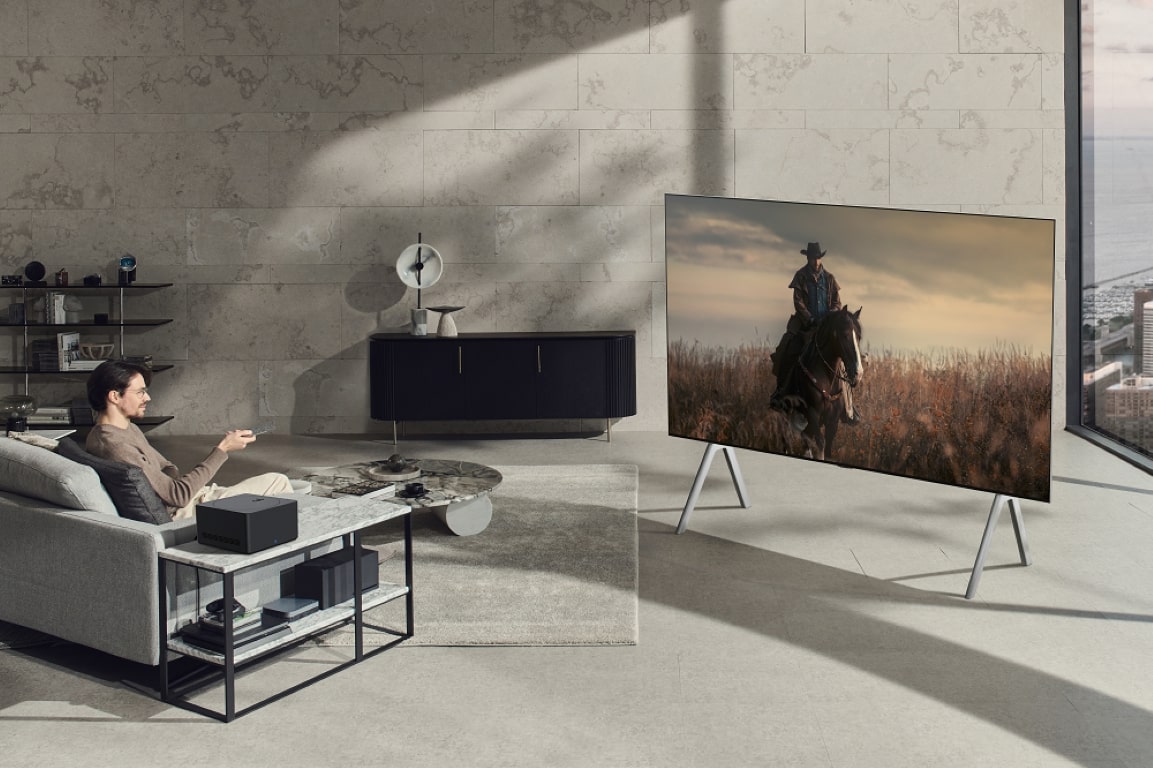 This mechanism is not flawless because it essentially changes the problem. In addition, a power cable is still required to connect the TV to the mains. Unlike a battery-powered 4K TV, it can – according to its designer – take up to six hours of autonomy per day. Although still in the prototype stage, the concept should be commercially available by the end of the year. We remain interested.

The brightness emitted by the screen is not taken into account only. For some, what’s left behind is just as important. In this area, Philips leads the dance with its Ambilight technology, which emits colored light onto the wall behind the TV to create the impression of image continuity.

During the Las vegan show, Signify (Philips Hue) announced a partnership with Samsung to bring similar technology to their TVs. The sync software costs €130 to download to your TV, bulbs not included.

Meanwhile, Nanoleaf has announced its own camera-based sync kit. The advantage of this solution is that it can be synchronized with all the lighting of the brand, thus extending over a full wall or more.

At least a few

All these little new features should greatly improve the quality of TVs released this year. However, this CES 2023 leaves a little taste of the unfinished business for technophiles in need of an effect.”Surprise! Wow“. We especially noted that there are no truly revolutionary innovations between Sony, which does not present a TV, and LG, which says that it does not have a transparent screen yet. But in a sector where 8K was demonstrated at CES almost 10 years ago, without really penetrating our living rooms for the moment, we will soon see We prefer small improvements that reinvent our TV concept.