There will be four eclipses in 2023: two moons and two suns.

Remember that lunar eclipses can be observed within hours and from almost anywhere in the world. It is enough that it is dark, the Moon is above the horizon and the sky is cloudless. In contrast, solar eclipses are visible to a relatively small swath of Earth and for a shorter period of time. To observe it without risking your health, you should protect your eyes and never look directly at the Sun.

Eclipses occur when the Earth, Moon, and Sun align in such a way that the light from our star is blocked by one of two celestial bodies, partially or completely.

The first eclipse of 2023 will take place on April 20. and it will be very special because one hybrid solar eclipse. This type of astronomical event happens only a few times a century, and the last one happened in April 2005.

Weather: Can we expect cold and snow in early 2023? 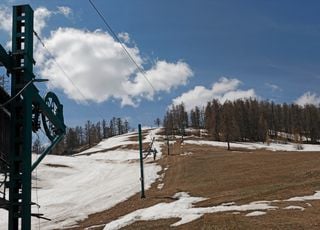 Types of solar eclipses are classified as follows: “total”: The moon completely blocks the sun’s disk; “annular”: the lunar disk blocks only the center of the solar disk, leaving the famous “ring of fire” around it; and “partially”: the Moon blocks only part of the sun’s disk. But there is also a hybrid solar eclipse.

A hybrid solar eclipse combines the characteristics of all eclipses, with a rare Earth-Moon-Sun alignment. The eclipse is first annular, then briefly becomes a total eclipse, and finally becomes annular again.

This event occurs because the Moon is at the limit point for its threshold shadow to reach the Earth. this, due to its curved shape, allows the natural satellite to completely block the sun’s access for a while and then return to the annular phase of the eclipse.

Regions that will see at least a partial eclipse on April 20: Part of Southeast Asia, Oceania, part of Antarctica, Indian and Pacific oceans. The eclipse, called Ningaloo, will pass over the North West Cape, a cape and large peninsula on Australia’s northwest coast. Those on this remote peninsula in Western Australia will enjoy a great location. Unfortunately, we won’t be able to see it from Argentina or anywhere else in America.

This will be a penumbral lunar eclipse. This means that our natural satellite passes through the outer part of the Earth’s shadow, which is sufficiently diffuse that only a slight darkening of the Moon’s disk will be visible from Earth.

This eclipse, the second of the year and the first lunar eclipse of 2023, It will be visible in most of Africa, Oceania, Antarctica, Europe and Asia, and parts of the Pacific, Atlantic and Indian Oceans. Unfortunately, this eclipse will not be visible from Brazil or anywhere else in the Americas.

This is an annular solar eclipse. In this case, The Moon is positioned between the Earth and the Sun in such a way that the Moon’s disc completely covers the center of the Sun’s disc, It left a thin “ring of fire” around the moon.

This amazing natural sight, like all solar eclipses, will be visible only on a narrow path. In this case, the trajectory of the merger will cross the USA from Oregon to Texas, then the Yucatan Peninsula in Mexico, as well as parts of Central America, Colombia and Brazil in South America, and part of the Pacific and Atlantic oceans. In the rest of America, It will be visible from Alaska to central Argentina, but only as a partial solar eclipse. In Brazil, the central and northern part of the country will benefit the most. Hopefully the weather will be nice!

This is the last eclipse of the year and it is a partial lunar eclipse. It can be seen in full in Europe and in most countries of Asia and Africa, It rises in the far east of America and is located in Australia.

It will take a while to see spectacular lunar eclipses from Brazil again, but don’t be discouraged, because several years in a row, the natural spectacle of eclipses has been the hero of the Brazilian sky, and the next will be partially conceivable in a large part of the country.

from brazil it was possible to observe several “blood moons” in recent years. This event occurs when the Earth comes between the Sun and our natural satellite, creating cones of shadow that darken the Moon when it is in full phase, giving it a reddish color, hence its name. This year, the entire planet will not have such a moon spectacle.

Total eclipses will be more difficult for observers in Brazil, but if you have time to travel south to Chile and Argentina, A total solar eclipse will occur in 2024.